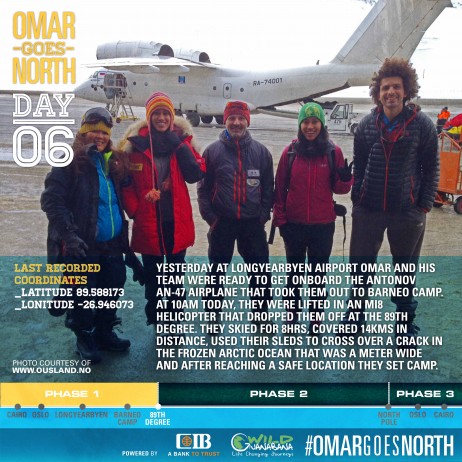 The team flew out from Barneo Camp and took the MI8 helicopter at 10am along with four other teams. After an hour flight they landed at the 89th degree. As the helicopter landed the team had to crouch due to the sound and power of the helicopter engine. Once the helicopter r had taken off the team were now all alone in the Arctic. Once they landed they began to move East for around 8 hours covering around 14km kilometres.  Unfortunately due to ice drift the team could wake up tomorrow to find themselves a few kilometres back.

At the moment the weather is gloomy but not too cold around -10 or -20 but with high wind speeds at 20 knots. The forecast tomorrow will most likely be sunnier with less wind but colder. Two hours within their walk found a large crack in the artic ocean that was a meter wide. The crack however was long so they had to cross it not go around it.  The team created a bridge from sleds that could float; they used skiis to cross over them. This was risky as any fall in the artic would be disaster. The team have arrived and set up camp, which was hard due to the wind. The last item for the day is to melt ice for water, make some food and get some rest.