It was time for me to go from mountains to oceans.

The idea of completing a human-powered ocean-crossing always intrigued me, but I knew that this was one perilous adventure I couldn’t do alone. On the 14th of December 2017, I teamed up with Omar Nour (Team o2) to take one of the world’s toughest rowing attempts and cross the Atlantic Ocean, with less than 30 minutes of life rowing experience and absolutely no knowledge of the ocean.

We set off to be the first Egyptian team to cross the Atlantic competing with other teams each made up of 1-4 rowers from all over the world.

A 5000 km journey that starts from San Sebastian de la Gomera in the Canary Islands, to Nelson’s Dockyard English Harbour in Antigua.

The idea of rowing for 40 days two hours on two hours off for 24 hours sounded like a huge mental suffering but we believed that it will make us know more about who we are and explore new horizon to our full potential.

No outside assistance is permitted throughout the crossing, once we left the harbor we were unsupported and we had only each other to rely on.

Our boat was approximately 7.5m long x 1.8m wide, built of wood, fiber glass, carbon fiber and Kevlar. Equipped with a water-maker to change the sea water into drinking water, solar panels to power GPS and other vital electrical. 90 days’ worth of food rations, first-aid kits, tracking beacons, an ‘AIS’ to allow us to communicate with passing vessels, a satellite telephone and specially-designed laptop called a ‘tough book’ to allow us to communicate with the outside world. We must clean the bottom of our boat every few days to avoid any algae build up which increases drag and water resistance. 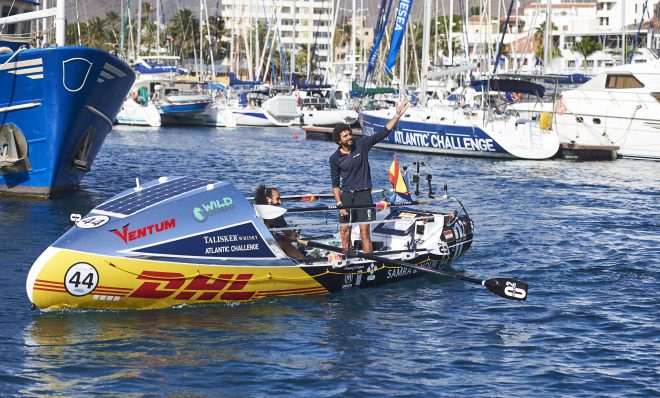 We had an intense physical training to ensure the best chance of success. We had to complete multiple qualifications including a RYA Yacht-master Ocean Theory, First Aid at Sea, Sea Survival and a VHF Radio License. 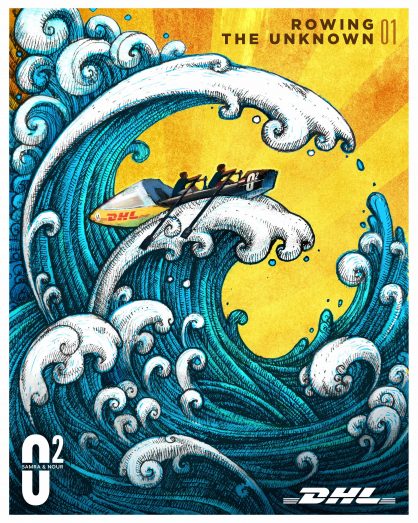 Team 02 were hit by 45 knot winds that caused their boat to capsize – their boat did not self-right. The 12 hours that followed became a survival story of epic proportions that was later made into a movie “Beyond The Raging Sea”.

The team got rescued by a 200m Greek-German cargo ship that came to their aid and was able to bring them onboard after 3-4 hours of rescue attempts in worsening conditions.

Team O2 dedicated their row to raising awareness of the global refugee crises. In an ironic twist, we faced the same dangers, terrors and decisions of those they meant to recognize and relieve.

Their documentary “Beyond the Raging sea” is aimed to help raise awareness for the 66 million displaced people around the world who go to these extremes just to find safe refuge for themselves and their families.

This expedition made it clear just how dangerous an adventure such as this can be – and how important it is to have professional and supportive partners.

Team O2 have to thank DHL Express for their support over the past year – they could not have been more supportive.

Team O2 might not have made it to Antigua but this was not the end of their adventure!