Having learned from my experience post Everest, I was already planning my next set of adventures before completing The 7-Summits. I’m currently trying to achieve what is known as The Adventurer or Explorer’s Grand Slam. This is the feat of climbing the highest mountain on every continent and skiing to the two poles; the North and South Pole. While Everest has been climbed by c.4000 people, The 7-Summits by c.400 people, the Adventurer Grand Slam has only been achieved by c.40 people in history.

Reducing the number of people having accomplished a challenge by a factor of 10 every time underlines the extent at which I’m trying to push myself. My objective is to one day achieve a world first. My plan is to travel to outer space in 2016. If I’m able to do so then I would be the only human in history who has completed the Explorer’s Grand Slam and gone to Space. It gives me goosebumps to be able to push my own limits to this level. And hopefully inspire future explorers from Egypt and the Arab world to push themselves even more and achieve far more than I could ever dream of.

On the 28th of December 2014 I succeed in becoming the first Egyptian to the ski to the South Pole. During 2 weeks in Antarctica and 10 days of skiing, the team covered more than 111Km (60 nautical miles) to reach the pole. Day by day accounts of the trip can be read through a string of blogs in December 2013. The expedition can also be followed via the hashtag #OmarGoesSouth on facebook, twitter and Instagram.  I’m truly grateful and indebted to my sponsor, the Commercial International Bank of Egypt (CIB) for believing in my dream and supporting me along the way. 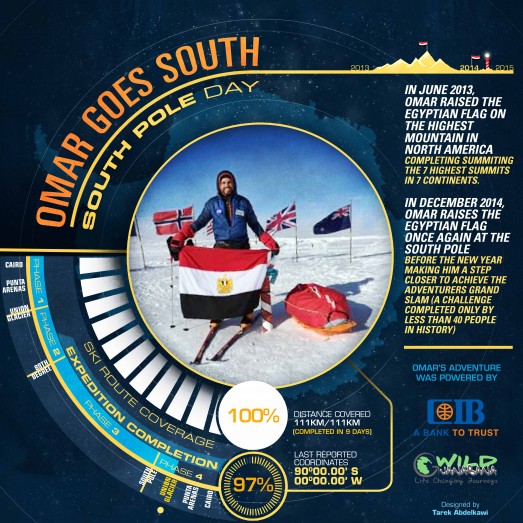 Here’s a video, Into White, made by my talented friend and director, Ahmed Koura, recounting my expedition towards the South Pole.

My last adventure was to ski from the 89th degree North to the North Pole after succeeding in skiing to the South Pole in December 2014.

The North Pole lies in the middle of the frozen Arctic Ocean. It’s arguably harder to reach than its Southern counterpart. It presents a few objective challenges which I have explored below. You can check out the photo album of my expedition on my Facebook page here or go through the blog here.

Weather: Although the weather is warmer than Antarctica on the scale, the high humidity and wind speeds of the Arctic make the cold much harsher. Antarctica enjoys a sun relatively high up in the sky 24 hours a day so while brutally cold and dry outside, the temperature inside my tent was relatively warm. In the vicinity of the North Pole, the sun is always very low on the horizon. Hence, if the weather is -30C outside then its probably around -27C inside. Basically, there is little chance to warm up throughout the duration of the expedition.

Polar Bears: The threat of attacks in the Arctic are very real. The team has to carry a shot gun to use if we’re attacked. The shot gun is used to scare off the bear only. Attacks may also occur during the night when the team is tucked away in their tent. Polar Bears are amazing and beautiful creatures that are non-aggressive. When we ski to the North Pole we enter its environment and due to the harsh environment we naturally become an ideal food source. During the expedition we are trying to achieve our objective while leaving the least possible impact on the environment and eco-system.

Leads: The word is used to refer to open spaces between the ice that occur due to the continuous rise in temperature on Earth. Some polar explorers use double dry suits to cross the water with sleds that are modified to be used as rafts. This is a time consuming and dangerous option should the equipment fail and the suit is compromised. We will decide between that and skiing around the leads which could add hours to our journey if they are quite long.

Shifting Ice: Remember we are skiing over a frozen ocean which means that the ice is constantly shifting. The ice could shift a couple of kilometres each day. If we’re unlucky, we could ski forward during the day and be somewhat pushed in the opposite direction of the pole during the night.

Pressure Ridges: The last degree to the South Pole ski is largely featureless like a flat ice desert and Sastrugi’s are hardly ever higher than 30cm. Sastrugi’s are small ice features along the way that look like frozen ripples in an ocean. In the Arctic North Pole expedition, due to the constant movement of the ice, pressure ridges can rise as high as 3m off the ground, making the journey to the North Pole far slower and more difficult as you can never truly get into a rhythm.

Navigation: Since we’re navigating to the Geographic North Pole and not the Magnetic North Pole, we cannot just rely on a traditional compass. We constantly have to correct for a deviation degree to move in the right trajectory. This slows the expedition pace down considerably. Moving in the direction of a North bearing pressure ridge can save navigation time but when visibility is low, we have to rely solely on our navigation tools. 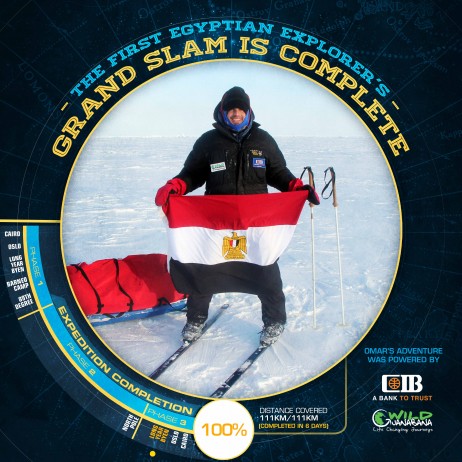 Check the video, you won’t believe what was my Mom’s reaction when I called her!