I dreamed of climbing Everest for 12 years and so when I finally made it in 2007 I could not help but feel a void. After some soul searching I realised I am still passionate about climbing and pushing myself in this way and so the dream of climbing the 7 Summits was born. To me this was an amazing opportunity to climb in all corners of the world while discovering all the unique cultures and topographies that these diverse locations had to offer.

It took me 6 years to climb all 7 Summits. I managed to climb all but 6 from the first attempt except the final summit, Mount Denali of Alaska, which I attempted first in 2012 and again in 2013 after being stuck in a 5-day 100km/hr storm the first time. In many ways I learned more from that expedition and dealing with “failure” than all the rest combined.

In 2013 I finally managed to become the first Egyptian to climb the 7 Summit and I also managed to complete the world’s first carbon neutral 7 Summits challenge to raise awareness about the fragility of nature and the importance to preserve it. All the emissions from my trips were calculated via an environmental consultancy and then offset by purchasing carbon credits off eligible green projects in developing countries.

I look back at the 7 Summits as one of my most cherished experiences. Every experience was special in its own unique way. I’ll leave you with a few lines on what made each one special and a diagram that summaries the chronology and highlights of every one of those 7 mountains.

To date I have climbed it 5 times. The first time was in a small team of two during the off season. At the end of April we faced heavy snow and almost Alps snow conditions at the top. My most memorable Kilimanjaro climb was with my late wife in 2010 before we got married where we were part of an expedition consisting of 26 people organised by my adventure travel company Wild Guanabana and aimed at raising money

and awareness for special need kids in Egypt. That year we raised over 1 million Egyptian Pounds for the cause. The initiative was coined The Right to Climb and it has taken place almost every year since, raising further donations and generating more awareness for the cause.

This was a special climb because I was joined with my childhood friend Mohamed Kamel and Abdelhameed Abou Youssef, another good friend of mine. The expedition was filmed by the talented adventure filmmaker Elia Saikaly and was the first time an Egyptian team tackles a mountain of this magnitude. The expedition was made all the more exciting as it began right at the time heavy conflict broke our between Russia and Georgian. It was not uncommon to hear rocket fire while we were climbing and we were lucky to pass all military checkpoints to make it to the mountain.

This mountain is located in the deep jungles of West Papua. It is one of the most remote parts of the world I have ever been. During those 2 weeks on the mountain, we had to trek through extremely dense jungle, often knee deep mud, negotiate tribal politics to avoid being stopped at “spear” point and finally climb the jagged rocky mountain itself. The highlight of the climb was a scary 20 meter Tyrolean traverse near the summit where one had to pull themselves on a horizontal rope across a 15m gap with a 30m drop off below.

A few of my 7 Summits climbs occurred in unique circumstances and this one is no different. I began the climb around the 20th of January of 2011 and the Egyptian revolution began on the 25th, which I was initially oblivious to being so high up and far away. It was only on the 28th that I realised the upheaval that was going on back home after trying to contact my family. The government had cut all phone lines and internet. Because I was attempting to climb this mountain solo, I had done several load carries and my equipment was high up on the mountain. I was faced with a difficult decision of continuing a climb I had trained hard for or going home to be with family in this unsafe period. I also wanted to be part of the change that my country was witnessing. In the end I decided to finish the climb and did this in only 11 days total because I was so keen to get back. The summit day was one of the hardest I’ve ever done because I wasn’t sufficiently acclimatised and doing it solo. My tent broke the day before in 70km/h winds so I had to find a different shelter. Ultimately I landed in Egypt on the 1st of Feb then headed straight to Tahrir square. I was delighted to have come so far and still manage to be standing in the middle of the square when former president Hosny Mubarak announced that he would step down from office.

Going to Antarctica was always a childhood dream of mine. Climbing Vinson not only meant that I would visit the continent but also undertake an extreme adventure in one of its more remote regions, the Ellsworth mountain range. I loved every minute of it. The feeling of landing in Antarctica for the first time is something that I will never forget. It’s amazing how a place so beautiful and serene can also be so foreboding. I was so taken by this continent and my time there that I returned again in December 2014 to ski the last degree to the South Pole.

I first attempted this climb in 2012 late April which is well before the regular season starts. The idea was to break trail most of the way and enjoy the remoteness of this beautiful region. It also meant that it was extremely cold with temperatures often dropping to -65 with the wind chill. After making it up to the final camp, we were hit with a 5-day 100km/h wind storm that thwarted our summit attempt. We were even forced back up to high camp after trying to descend on the 4th day due to high winds on the ridge, and this is after we had taken down our entire camp. Finally we found a break in the weather to get off the mountain before food ran out. In 2013, I returned later on in the season and we were a little more lucky with the weather, although at some point it seemed like there would be a repeat of the year before. Denali (its Alaskan name) was a worthy final challenge in this amazing 7 peak adventure and I’m grateful for what the mountain taught me on that fateful climb in 2012.

QUICK FACTS ON MY 7 SUMMITS JOURNEY: 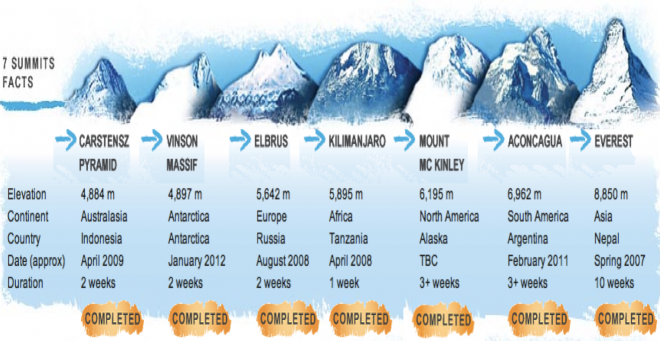