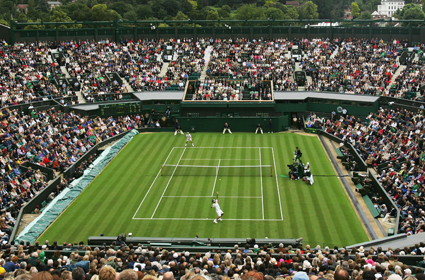 Born in Wimbledon around the time the tournament was being played, my parents were convinced that I was going to be the Egyptian Boris Becker. Sadly, I had a terrible backhand and was never much of a tennis player! By age 11, I had developed a nasty chest Asthma, waking up in the middle of the night breathless. My alarmed parents took me to a doctor who said that it would be cured in my mid-twenties but if I wanted it to disappear faster then I should start taking sports seriously. I had not learnt to be patient at the time and so as of the next day I made running a big part of my life and my Asthma was gone in 2 months. I took up Squash for several years and then basketball, which I played competitively for many years. I remember Everest always amazed me but I had never given climbing a second thought. 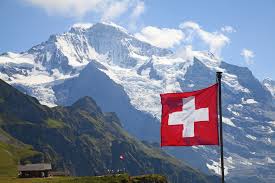 Age 16 while in a summer camp in Switzerland I was given an opportunity to climb a mountain. It was the first time I’d ever seen snow. I immediately fell in love with the beauty of the place and the sense of calm it gave me. I still remember getting to the top of the mountain and finding a logbook under some rocks with entries of people who had summited and realizing I was the only Egyptian. I felt proud making that entry, I wrote my name, drew our flag and pictures of the pyramids of Giza. All I knew about mountains was that Everest was the highest and so I wanted to climb it. I began researching the topic only to be blown away by the magnitude of the preparation and commitment involved. It was a dream that would take years to fulfill. Rather than forget about it, I decided to begin understanding the skills I needed to acquire and begin breaking down that one big goal into many smaller more achievable ones. 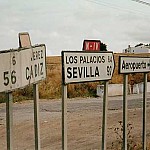 Age 21, I graduated from the American University in Cairo with a BA in Economics then flew to London to pursue my dream of working and making a successful career for myself abroad. Initially, everything went as planned. I landed a cushy job in a bulge bracket investment

bank, did very well there and had an ever-blossoming social life. On one sunny London afternoon, i met with my friend Dennis for lunch. We would often fantasize about how we would one day travel the world and explore its many cultures and landscapes. That particular time he told me about his cycling trip from Nice to Naples. I immediately fell in love with the idea and 4 months later I was in Sevilla alone on a bicycle ready to begin my own adventure. The two weeks I spent touring the region were physically grueling but evoked many feelings and thoughts that had until then been waiting to surface. I realized how passionate I was about travelling, exploration, pushing my own personal limits and comfort zones and I began thinking deeply about many things I had previously taken for granted.

Deciding to Quit My Job & the Backpacking Idea 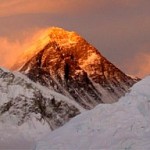 I realized that taking a week-long trip here and there was only scratching the surface and so the idea of a longer, more involving trip began to surface in my mind – 6 months, a year maybe? I’d love to say that the curiosity of embarking on such an adventure more than outweighed the confines of my daily life and social pressures, but the truth is that taking the decision to leave everything behind and embrace ‘uncertainty’ never came easily. At that time I had been living and working in Hong Kong as part of a secondment from London and getting paid

well. I was in a city full of character, surrounded by friends and beautiful women. An exotic weekend getaway to Thai white sandy beaches or a captivating Chinese town was a couple of hours’ flight away or less. Life had a certain comfort to it that was akin to my days back home in Cairo. I began to feel life was too predictable, I could tell with reasonable certainty what I would be doing in the next three or four years and it scared me. There was so much more to see and do. The choice became clear. I would remove myself from those all too familiar comfort zones and re-educate myself by way of immersing myself in an endeavor that would engage and challenge my every sense. A trip that lasted a whole year with the ambition of experiencing a considerable part of the world’s villages, towns, cities, diverse landscape and people, meant that I wouldn’t be able to stay in one place for too long. A lone traveller, I would follow my heart, wandering through the far reaches of this world in search of happiness and myself. 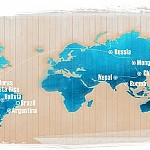 My journey began in December 2002 and lasted for 370 days non-stop across 14 countries in Asia and Latin America (details of the trip can be found under the Journey section then 370-Days-Trip). This trip was not only a fantastic learning experience but also it also allowed me to climb more mountains in a year than I could have ever climbed in 5 combined had I been working. I went from trekking fairly straightforward snowy peaks to climbing multi-pitch near-vertical ice routes. Over the next 2 years after my trip I continued to nurture my climbing habit. Everest seemed to get closer yet it still remained a surreal goal. 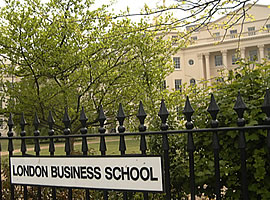 I went back to working in banking for a while then began to feel like I needed a career change and so I applied and got accepted into London Business School to do my MBA. In late 2005 I went on a 1-month climbing trip in Peru before beginning the course to get climbing “out of my system’” and focus on studying. I returned having successfully climbed the hardest and highest mountains I had ever attempted and looking forward to keeping my promise. Little did I know that 1.5 months into the MBA I would receive an email from my colleague Ben Stephens saying that he wanted to put a team together to climb Mount Everest. My decision was made even before I was done reading his email and all my priorities changed. At first there were 40 interested members but after a month of planning and a climbing trip in the Scottish winter, it went down to the 4 who became the core team and remained together till the very end. We spent 2 years preparing, training 6 or 7 times a week, 2 to 3 hours a day. Together we attempted the 6th highest mountain in the world and climbed various technical peaks in the UK and Alps. These practice climbs, although could not simulate all the challenges of Everest, allowed us to experience working together as a team under severe conditions and that brought us closer together. Our resilience would definitely be tested on the mountain! 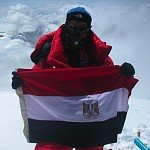 On March 25th 2007 our team departed for Kathmandu, Nepal to attempt Everest from the South side. I was joined by my brother for the hike up to base camp (5,340m), which marked the beginning of the climb. From there Ben Stephens, Victoria James, Greg Maud and I guided by Kenton Cool ventured through the Khumbu Ice-Fall and began making progressive trips up and down the mountain to acclimatize. In early May we had spent a night at Camp 3 (7,300m) and were ready to go for the summit. On the 17th of May of 2007 at precisely 9:49AM I reached the summit of 8,850m Mount Everest to become the first Egyptian and youngest Arab to do so. Greg summited on the same day and Ben and Tori one week later. 4 out of 4 to reach the summit is an incredible result of which we are very proud. 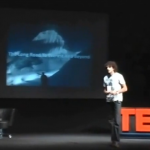 Since my return from Everest, I have become passion with spreading my belief that impossible is nothing with hard work and perseverance. There are no limits once we put our mind to something. To this end I have endeavored to use my Everest and other travel and climbing experiences as a tool to help motivate and inspire people, especially youth, to follow their dreams and passion. So far I have given 70+ talks in 4 countries to over 12,000+ people in schools, universities, companies and NGOs. In 2010 and 2011 I was invited to speak at TEDxCairo and TEDxAbuDhabiU.

In May of 2009 I decided to leave my career as a banker and private equity professional behind to marry my passion for travel, exploration and sharing these experiences with others, with my work. So at the height of the financial crisis I decided to start a company that relies completely on discretionary spending and name it after a tropical fruit. Wild Guanabana creates unique Adventure Travel experiences around the world. So far we have taken hundreds of people on adventures worldwide from learning how to dance tango in Argentina, to white-water rafting in Costa Rica, ice climbing in France and climbing mountains in Africa. It’s also the first carbon neutral travel company in the Middle East & North Africa and the recipient of various international and regional industry awards including the Global Tourism Award at the London Travel Market.

After dreaming and planning to climb Everest for 12 years then summiting it, I felt a void! I thought long and hard to realize thatI still loved climbing mountains and challenging myself in this way and so I set myself the challenge of climbing the highest mountain on every continent, the 7 Summits. I climbed Kilimanjaro 5 times beginning in April 2008. The following year, with friend, climber and director Elia Saikaly (www.findinglife.ca) we filmed an expedition that took 3 Egyptians from ‘Sand To Snow’ on the summit of Elbrus, the highest mountain in Europe. In April 2009, I climbed Carstenz Pyramid, the highest mountain in Australasia and in February 2011 became the first Arab to climb Aconcagua, the highest mountain in South America, solo. The following December I took off to Antarctica and succeeded in climbing the highest mountain before heading to Alaksa in April 2012 to complete the final mountain, Denali. Due to severe weather we were unable to make an attempt on the summit that year and so finally I returned in May 2013 to summit the final mountain to become the first Egyptian ever to do so. This was also the world’s first carbon neutral 7 Summits expedition. 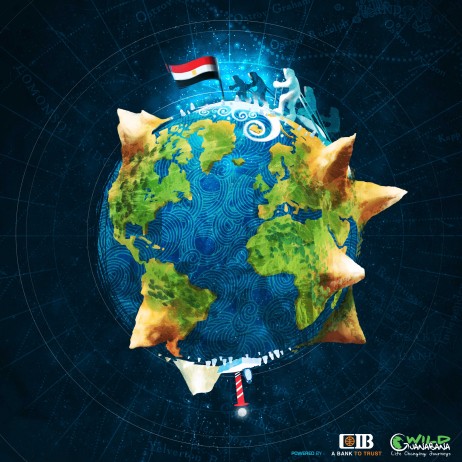 As a child, like many others, I always dreamed of going to Space. The dream seemed unrealistic because Egypt did not have a space agency. In 2005, I attended a keynote address by Sir Richard Brandon where he outlined his plans for Virgin Galactic proving that space would be accessible to everyone. However, the cost remained an obstacle. Until, 2013 when competing organization XCOR Space Expeditions announced a competition where the winner would win a trip to Space. The competition lasted for 9 months and over 2 million applicants applied. On the 6th of December of the same year, I managed to win and was awarded my ticket from Buzz Aldrin (2nd man on the moon) and in doing so, I am set to become Egypt’s first Astronaut in 2016. Once completed I will become the first human in history to have completed the Explorers Grand Slam and gone to Space!