In December of 2003 I began a 370-day journey across much of Asia and Latin America visiting 14 countries. It was one of the most amazing years of my life and I owe much to it. I have described some of its highlights below. In the future, I hope to publish many more of my encounters and stories from this life-changing experience in a memoire. You can find some short stories here. 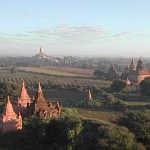 My 370-day journey began in Yangon (formerly Rangoon), the capital of the Union of Mynamar (formerly Burma). Despite the iron fist government that rules it, the people are extremely friendly and welcoming. The quiet pace and uniqueness of this wonderful country made it an ideal place to start such a long journey. The mystic temples of the ancient city of Bagan, the monks at the jumping cat monastery or the rituals at Mount Popa’s mountain peak temple were all truly fascinating, however, nothing compared to the warmness and simplicity of the people. I could not find better company to get stuck with during a cramped 25-hour bus journey!

I dreamed of seeing the Himalayas of Nepal since the age of 16. It took me 6 years to get there but every day and night that I spent dreaming of those majestic giants was most definitely worth it. I began by trekking in the Annapurna and then Langtang region, setting my eyes on landscapes so diverse that you would think you were visiting more than one country or a different planet altogether. During my last few days I saw the mountain of my dreams, Everest. It was hundreds of miles away that meant it looked small compared to the surrounding mountains. However, its shape was distinct and I had a strong feeling that I would be back there someday. 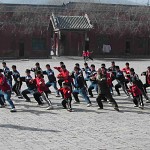 A friend once told me that going to China is like taking a break from the rest of the world. The country is so vast and unique that it’s hard to compare it with anywhere else. This was my second visit and there was still so much to do and see. The goal was to start from its South-West Yunnan province then head North to Beijing to catch the Trans-Siberian train. Among the many highlights were those towns closest to the Tibetan border; Dali, Lijiang and Zhongdian for their unique culture and breathtaking scenery. My stay in the Shaolin monasteries of central China admiring the skills and grace of their flawless gurus is something that I will never forget. 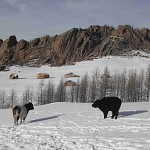 The capital of Mongolia Ulan Bator feels very much like Asian Russia; very communist and utilitarian. As son as you step out of the only big city, it suddenly feels like you’ve been teleported hundreds of years back in time. All you can find are a few temples, horses, herdsmen and acres upon acres of uninhabited steppe. I spent a couple of days living with a Mongolian herdsman and his family. It was the perfect way to immerse myself. Apart from drawing for his kids endless pictures of warriors and horses then help them slide down snowy hills on a wooden tray, I spent my time herding Yaks, drinking salty tea and trying to make conversation! 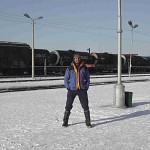 I spent most of my time in Russia on the Trans-Siberian railway that is the longest overland train route in the world. It took 3.5 days alone to get from Irkutsk to Moscow! After crossing the border from desolate Mongolia, the difficulty of Asian Russia seemed like a new definition of comfort. From the capital of Western Siberia I ventured into frozen Lake Baikal and temperatures of -40C. And from there I travelled to Moscow and St.Petersburgh. After dodging multiple Russian officers on account of not having the right documentation, I finally got arrested and almost denied from boarding my flight for being in possession of nothing but a samurai sword, chinese crossbow and a couple of Nepalese Gurka knives! 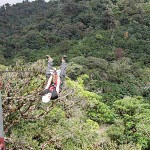 Flying into Costa Rica from Asia constituted not only a change in people and scenery but marked moving from being a wanderer to a worker. My most interesting stint was working on the Nicoya Pininsula on a marine conservation project. For 3 weeks we slept on contraptions made of wooden logs and tarpoline with the ocean only 20m away and a dense jungle filled with iguanas and spider monkeys behind us. The objective was to prove that there was enough diversity and quantity of fish so that they could give the area marine park status and stop commercial fishing. Then I toured the country including a 3-week trek through the jungle and rowing a long boat down a river to the Caribbean Ocean. 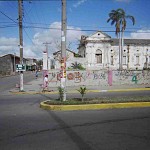 Global statistics will till you that Nicaragua is one of the poorest countries in the world; however, you would never get that impression being there. Its people are the most generous I’ve seen. Whatever they have they are happy to offer. I spent 3 weeks working on a community project in El Cacao village where we helped the locals build a community center and in the evening we taught the children English. It was hard to leave. I then spent the remainder of my time touring the country. My most memorable experiences were climbing the Volcano Conception, kicking back on Ometepe Island and walking the streets of picturesque Grenada. 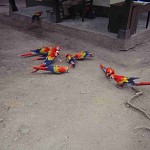 My journey through Honduras’ mainland was quite brief. Aside from visits to ancient Mayan ruins, I spent considerable time on the bay islands of Roatan. More developed than neighboring Utila, the place still retained a unique, laid back and quiet atmosphere. That combined with ideal weather and remarkable diving in 50m of visibility oceanic waters resulted in a breathtaking experience. The underwater vistas were so clear, rich and colorful that one often got the impression that he is diving in a huge fish tank filled with the world’s most exotic marine life. 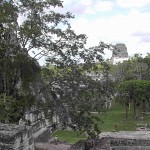 Guatemala was where I finally faced the fact that learning Spanish off the street would get me so far and hunkered down in the beautiful town of Antigua for 4 days of intensive classes. What I didn’t know that the ambience, charm and many attractions of this town would keep me for far longer. When I did manage to pull myself away, it was to explore the great Lake Atitlan and many of its exotic coastal towns. It was not time to leave until I paid a visit to what is arguably the greatest Mayan heritage site of all, Tikal. From one pyramid to the other and through my readings I could not help see the vast similarity that existed between that great culture and our own ancient Egyptian ancestors. For many years I fantasized about traveling to Huaraz, the climbing Mecca of Latin America and climbing its spectacular peaks. Now that I was finally there, taking in the majesty of the Cordillera Blanca first-hand, I was hooked forever. Here in my mind is where I was finally promoted to a mountaineer, albeit a beginner. Peru is also the country where I spent the most time and visited the most places; I simply could never get enough. From lost Incan cities to awe-inspiring diverse landscapes ranging from petrified deserts to wide expanses of pristine lakes to snow capped peaks, this country truly makes you believe in the beauty and genius of creation. 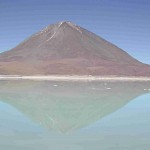 To me Bolivia is where I climbed my first 6000-meter mountain. It is where I spoke Arabic for the first time after 9 months of traveling and ate Hummus. But it is much more than that. It is home to the largest indigenous population of Latin America and therefore maintains a cultural identity like no other; strong and captivating like its people. Here I made many friends, cycled down what is dubbed as the world’s most dangerous downhill route, saw red-tinted lakes that made you think you were on Mars and ventured onto salt flats so vast that it seemed like you were in Greenland yet only seconds later to find bubbling hot geysers exploding out of the ground. 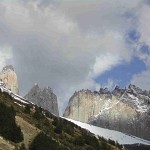 On paper, Chile looks a little like me, long and thin. However, unlike me, it is impossible to get bored of. Having one country stretched over thousands of kilometers of land from the driest place on earth, the Atacama desert to lush green valleys to the world’s most glaciated land outside of Antarctica, it makes you wonder why anyone would live anywhere else. It is here where I was saved by the generosity of the people and where I wandered in a place so heavenly that I thought it never existed except in the wildest of dreams, the national park of Torres del Paine. Go there, you will be inspired forever. Argentina means many things to different people. Football? Tango? Gourmet steaks? Well, it is all that but you need to go there to realize that those things are only the icing on the cake; or merely a natural consequence when you think of its incredibly charming and talented people and the beautiful lands in which they live. Where else in the world would you find exotic wildlife, big mountains, dense rainforests, expansive glaciers, serene deserts and modern civilization all within one border? It made leaving the country difficult but also because after 9 months of Spanish speaking and growing accustomed to it, I would once again begin learning from scratch. I crossed over the Brazil border near Iguaçu Falls, which is arguably the most dramatic stretch of waterfalls in the world. The powerful sounds of the water crashing down and the sheer volume of it left one wondering how there are places on this earth with no water at all. From here I ventured onto the beautiful and cheerful island of Florianopolis where a few foreigners and I were audacious enough to challenge a team of Brazilians at a game of beach football! The rest of that story I have conveniently blocked from memory. There was no better place to end this yearlong journey other than Rio. Did I mention that these people love to party?