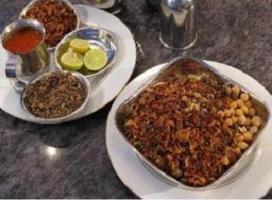 The blog was originally written for National Geographic as part of the Energy Diet initiative. I was asked to keep a blog for a few weeks about my attempts to minimize my carbon footprint. It was rather challenging to do especially that during part of it I was climbing Aconcagua, the highest mountain in Latin America, solo.

When you spend 2.5 weeks on a mountain on your own with nothing but a tiny gas stove and limited ingredients, the results are less than inspiring. You spend most of your time day dreaming about what you will have when you get back home. That was until I read my email to check The Energy Diet blog topic for that week, FOOD!  My ambitions of ‘pigging’ out were immediately deflated. I’m glad I indulged in Mendoza, Argentina in an Argentinean steak before returning!

Frankly speaking, on my return to Egypt on the 6th of February, I was in no mood for elaborate cuisine. The country was in the middle of the greatest revolution in its history and arguably the world over. The people of Egypt were on the streets every day protesting peacefully for their freedom, dignity and a better future. I literally went from the airport to Tahrir Square to join my people and then every day thereafter. The energy that I witnessed at this historic Cairo spot, was made all the more legendary by the feeling of love and equality that swept the place. During the few days I was away, the square had morphed to become a country of its own; classrooms, a barbershop and even an open air memorial for the martyrs. A utopian microcosm of peace and creativity, we Egyptians managed to keep our jovial spirit amidst it all despite the atrocities that had occurred. And I was lucky to be in the middle of the square when the good news of our then president stepping down was announced. It was an amazing celebration!

To save money during these times and given the amount of time spent on the street, I resorted to changing my eating habits to having two meals a day; a light breakfast and Koshari. The latter is a tasty staple vegetarian traditional Egyptian meal that is a mish-mash of various ingredients including macaroni, rice, lentils, onions and tomato sauce. A plateful of Koshari will leave your engines running for the most part of the day! Eating it served hot at the restaurant itself meant no disposable containers had to be used in the process.So thanks to the beautiful revolution not only did we manage to change a 30-year-old corrupt regime but it also helped in switching a notorious carnivore to a temporary vegetarian diet for an entire week!