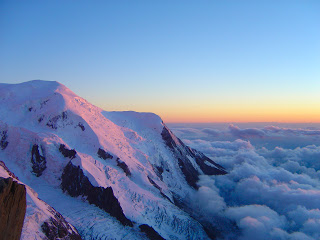 In September 2012 I will be climbing Mont Blanc with a team of Egyptians. I’ve recently been asked a few times why we’re still going ahead with our Mont Blanc climb plans despite the fact that 11 climbers tragically passed away recently.

For those who did not know, 9 climbers (including 4 guides) were killed in an avalanche recently while attempting the summit of Mont Blanc on the ‘three mont blancs’ route. Two other climbers froze to death on the Gouter route. You can check out an article about it yourself here and here respectively.

Ok so here is the deal:

1- Alpine climbing is a dangerous endeavor with inherent risks and we all need to understand that coming in. I guess if it was straightforward, everyone would do it. We cannot eliminate risk 100% on difficult climbs but can reduce it to negligible degrees through the right kind of experience, preparation and planning.

2- We’ve picked to climb in September, the dry season, which has a significantly less avalanche risk than June/July. – which is when both accidents happened. Moreover, believe it or not that particular route is now safer given the avalanche has eliminated that risk for now. Naturally, this may change over the course of the season and needs to be closely monitored.

3- The accident that happened on the 3 Mont Blancs route (one of the 2 routes we would consider to climb the mountain) is extremely rare. In fact it so rare that the last accident that happened there was 17 years ago. My climbing partner Victor Saunders was on the mountain that day. He woke up for the summit attempt then decided the weather was not good enough and started climbing a couple of hours later. This saved him and his team. He then became an integral part of the rescue team. So the bottom line is, even though accidents do happen, exercising caution pays off and we plan to edge on the extreme side of caution.

4- The accident that happened on the Gouter route was of 2 climbers who were unprepared and unexperienced for the undertaking, which is essentially climbing Mont Blanc in bad weather and unguided. When they got caught in a storm, they got lost and eventually froze to death. Our team will be fully supported and we will not take any more risk that we need to.

5- There are 2 main routes up Mont Blanc and we will consider switching to the other route up to the last minute if weather does not cooperate. Moreover, if we don’t like the way Mont Blanc looks at all then we will use the time we have to climb an entirely different mountain altogether.

6- The most important thing of all is for every member of the team to understand the golden rule of alpine climbing:

“Getting to the top is optional. Getting down is mandatory.” – Ed Visteurs