Do you guys remember Digg.com? Even though not as big in the Middle East, in its heyday it was an internet startup king that redefined the way we experience and share content. Then the ‘Digg’ button came into play and if you got enough Diggs you would make it to the homepage and then your website would get traffic by the bucketload. At one point in time google offered $200million to buy it. Just this week it was announced that the company was sold for $0.5million! That’s 0.25% of its top value! In later news it was revealed that the company was actually split into 3 and while one of the companies went for $0.5m, the other 2 amounted to $16m. Of course that’s a lot of money for mere mortals like me but that’s still 8% of their Google valuation. So what happened and can we all learn something from this?

– The company was founded in 2004 December 5 with just $6K of startup capital injected by it’s co-founder Kevin Rose who was 27 at the time. His partners were Ron Gorodetsky, Owen Byrne and Jay Adelson

– In October 2005 on account of their exponentially growing userbase they received $2.6 million in venture capital funding

– In July 2008, reports surfaced that Google made an offer to buy the company for $200 million and almost immediately after they managed to raise another $28.7 million for further growth plans

1 – In 2009, undoubtedly under pressure from its investors

to boost its revenue model, they introduced the Digg Tool Bar (picture below)

The Digg Tool Bar seemed like a good idea at first (to Digg that is!) as it ensured that users who left their site would return by putting a small tool bar at the top of pages users visited through their platform. Users could vote the stories up or down. Good idea? NOT. People found this to be intruding on their experience and a bit invasive. As a result, a lot of people began to leave. Others found work arounds. 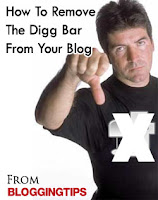 2- Then to further boost revenue, they introduced advertising. Those appeared on the front page in the middle of the user generated content. Even though these ads were clearly marked as such, they did not go well with users and again Digg lost more users.

3- To try and salvage things, Digg hired a new CEO (ex-Amazon exec) after co-founder Rose left the company, and launched version 4.0. This is what happened: 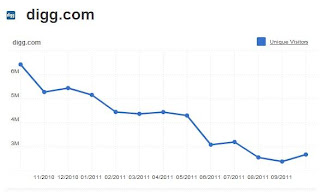 And as a percentage of total USA internet users: 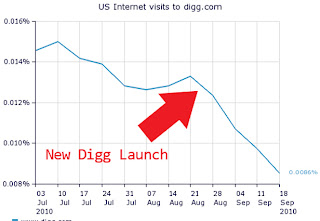 So why did Digg fail?

Personally I can think of 3 major reasons why this happened:

1 – They didn’t believe in their own full potential: Digg had the real chance of becoming a mega uber social site in of themselves at one point, instead early on they shifted their social networking conversations to facebook and twitter through integrations. You can’t like a tweet on twitter or tweet a like on facebook! When Digg started to lose favor for some of the reason highlighted above and their conversations were already happening elsewhere, this ultimately meant that their users could easily leave and continue to engage on FB and twitter. When those users needed social bookmarking, they visited Reddit.com, Digg’s rival that is still going strong

(perversely if your core business is not social interaction but it’s something that your company benefits from, there is no reason why you wouldn’t benefit from twitter or facebook’s installed user base. Digg gave away its core business and value driver)

2- The site was structurally flawed: It had a major winners bias. Users who created a big following early on could vote their content up more, get on the front page, get more views and hence diggs and therefore have a higher chance of always being back on the front page. It did not even have to be good content anymore. Unless you were very lucky, if you did not get in early, your content was a pawn. Because those early users were geeks, the content was very appealing to a specific group of people which made Digg super popular with that group and that’s great. But when they branched out to other topics, their content was lame and when it rose to the top was already outdated

3- Too Little Too Late: Eventually management tried to restore the winning philosophy and some of the features that had made them popular but they did it too slowly and when it was too late. By that time Reddit.com’s traffic had already surpassed Digg and the momentum was just too strong to contain.