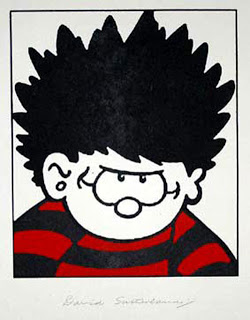 It was mid May in Cairo and even though it was late afternoon, the sun was the usual scorcher. Those were the days I never had to use sunblock and before I lived in London for 7 years and discovered that I make Michael Jackson look black. The temperature in El Alsson School was roughly 40% celsuis. Several sweat beads had begun to form in unison at the part on the back of my neck that makes you want to tilt your head upwards and try to dry it with your own hair. As we stood in line waiting for the final bell to ring, I pondered the evil genius of the teachers who are getting us back for a days worth of mischief.

As soon as the bell went off, it became every kid for himself, to the big bus. My friend Nadim and I took a well-reheresed short cut and managed to get to the bus ahead of most. Apart from a handful of seats forever reserved by the scary seniors, everything was fair game and so we picked our favorite seats. It was Nadim’s turn to sit by the window. The bus filled up quickly but twenty minutes later we still hadn’t moved. Nadim looked out the window down to see the shiny bald head of Mr Hazem the bus superintendent.

He turned and looked at me saying, “no way you can spill the bottle of water on his head”

“I can but we would get into trouble,” I responded feeling a bit perplexed at how ambitious the idea was.

“Told you that you can’t do it” smiled Nadim, looking back at Mr Hazem’s glistening head.

Nadim was smart and he knew that this was a sure fire way of getting to me. Instantly my blood began to boil and I started to feel a first mild, then quickly overhelming compulsion to do the one thing that someone had just told me I cannot do. I grabbed the water flask from my school bag and in one swift move, stepped towards the window, poured every bit of the liquid on the man’s head then jumped back into my seat. He let out a shriek and boarded the bus looking like he was about to kill someone.

It didn’t take long for the nerdy kid on our opposite aisle to rat us out. He recounted the whole affair in striking detail. We were humilated in front of 60 other kids, ordered off the bus and escorted to the headmaster’s offce. Nadim and I knew that the key to survival would be to tell the exact same story and stick to it. And we did exactly that, bouncing false testemonies between us like skilled table tennis players, that made it all seem like an accident. She was satisfied and sent us to the vice-principal’s office to sign things off. We had to tell the same fabricated story one last time. To this day, I’m not quite sure what got into me but the conversation didn’t really go according to plan.

“why did you spill the water on Mr Hazem’s head? Said the vice-principal.

I paused momentarily, glanced at Nadim then looked him straight it in the eye and said, “well it was very hot and I thought it would be refreshing”.

His pupils seemed to dilate ever so slightly then he regained his composure and shouted, “you boys are expelled from the bus for a month!”

As Nadim and I sat on the bus on this one last journey home, shoulders hunched, we wondered what we’d tell our parents. I felt terrified to say the least and by the time we got home we still had no bright ideas. Several hours later it hit me. Why tell them at all? I called Nadim right away to explain. Since the only phone I was allowed to use was in my parents room I had to be quiet.

“I know what we should do” I said in a hushed voice.

“We put on our uniforms as if nothing happened and wait for the bus tomorrow morning” I said non-chalantly. I let it sink in as Nadim remained silent. “Think about it, it’s the last thing anyone would expect.” After some convincing, Nadim had to agree. After all, it was the only idea we had and it was dumb enough to work.

The next morning as I got ready for school I tried not to think about my plan backfiring and my parents reaction if that happened. The thought made my stomach turn. Finally, the moment of truth had come with the bus’ arrival. I took one deep breath and boarded the bus. As I walked through the aisle, I wondered if it had worked or someone was going to say something. Finally, I reached Nadim sitting in our regular row smiling. “It worked and I left you the window seat.”