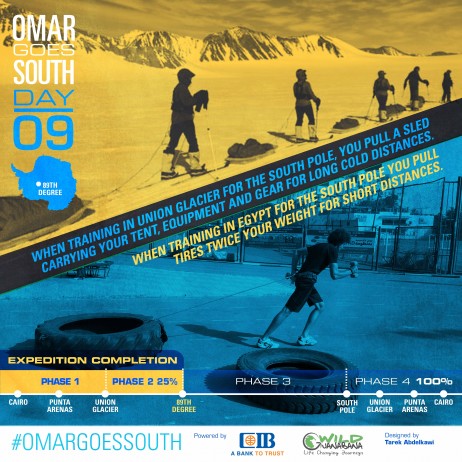 “Omar’s Updates from The South Pole!

Current coordinates: 89.1460S 82.1223W
Day 1: Omar and his team landed on the 89th degree south and skied for 4km to set up camp that took about an hour. The team made pasta and chicken for dinner but Omar felt off later that day in the stomach. The team will ski less initially as they acclimatize at an elevation of 2700m.

Day 2: The next day in the morning they woke up and took an hour to make breakfast in the camp. It also took them about an hour or more to disassemble the camp. So far they’ve covered 14.4% of skiing time towards the South Pole (16kms out of 111km). The weather is around -30 degrees but luckily the wind speed has not gone past 10km/hr. However if wind speed gets any stronger it will be a problem. Omar’s still got the stomach bug so he currently on antibiotics and medication to recover. omargoessouth#”